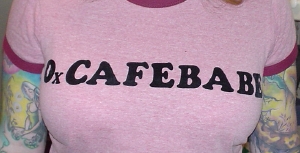 As far as I know, I’m the guilty party on this one. I was totally unaware of the NeXT connection. The small number of interesting HEX words is probably the source of the match. As for the derivation of the use of CAFEBABE in Java, it’s somewhat circuitous:

We used to go to lunch at a place called St Michael’s Alley. According to local legend, in the deep dark past, the Grateful Dead used to perform there before they made it big. It was a pretty funky place that was definitely a Grateful Dead Kinda Place. When Jerry died, they even put up a little Buddhist-esque shrine. When we used to go there, we referred to the place as Cafe Dead.

Somewhere along the line it was noticed that this was a HEX number. I was re-vamping some file format code and needed a couple of magic numbers: one for the persistent object file, and one for classes. I used CAFEDEAD for the object file format, and in grepping for 4 character hex words that fit after CAFE (it seemed to be a good theme) I hit on BABE and decided to use it.